Is Amazon Poaching Your People? 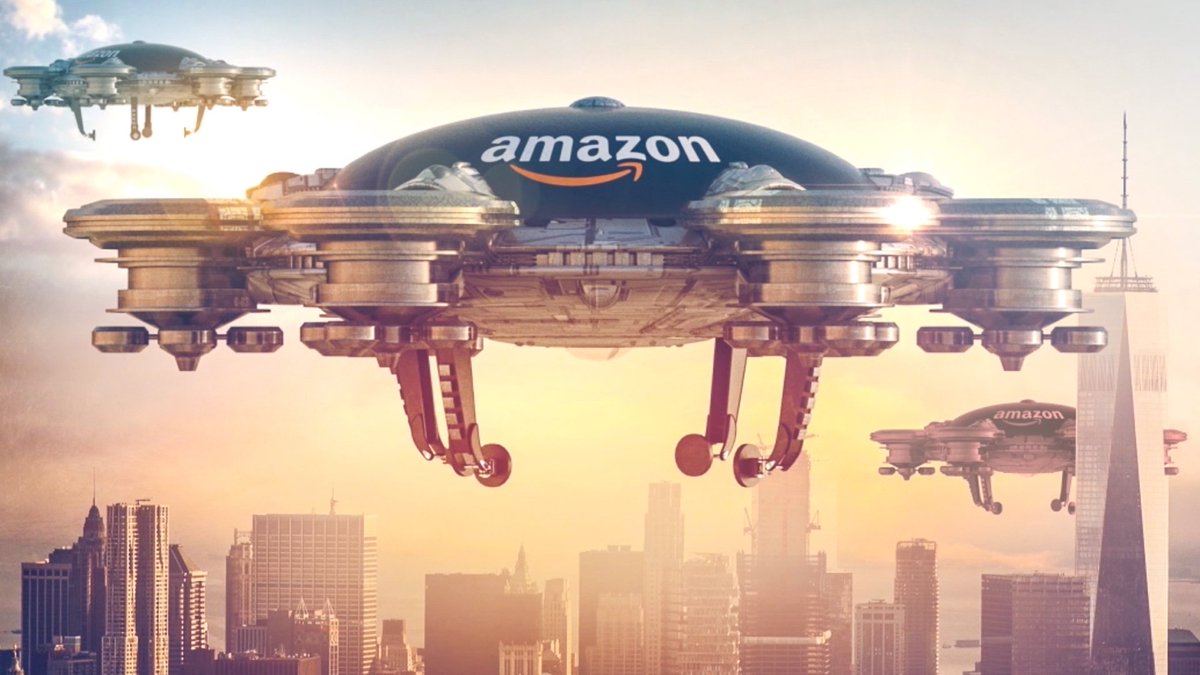 Image from the cover of The Economist, March 2017, Print Edition

In March 2017, The Economist featured the image above on its cover with the words, “Amazon’s empire, and what could threaten it.”

It’s comforting to know that someone believes Amazon can be stopped. From an outsider’s perspective, there are few obstacles in its path to world domination. The company enjoys a fanatical following among consumers and employees alike. Founded in ‘94, Amazon has grown to 132,000 people – almost enough to fill the Rogers Centre 2.5 times. Part of its growth came via acquisitions of over 50 companies across various verticals, the most recent of which is global grocer, Whole Foods.

In March of 2015, Amazon opened its first Toronto office, which houses over 700 people today. In June 2017, a new and larger Toronto office opened, and according to Tamir Bar-Haim, Amazon Media Group’s Country Manager, they have plans to fill an additional 200 jobs in software development, cloud computing, HR, and fulfilment technologies.

If you’re hiring in the tech sector, you know that Canada’s supply of talent is not keeping pace with demand for software professionals. Our startup sector is skyrocketing and many people think we need foreign tech leaders to help us develop into a world class tech innovator. Is it a good thing that Amazon is here? Or should we be concerned that a tech giant is mining Toronto’s talent as Canadian entrepreneurs and innovators struggle to hire?

We turned to LinkedIn for the answer.

As a regular LinkedIn user, your search functionality is somewhat limited, but upgrade to a Recruiter Account and the world is your oyster. To establish the actual number of Amazonians in Toronto, we filtered for location in the GTA (Ontario, Toronto, North York, Markham), current company listed as Amazon or Amazon Web Services, and people who joined Amazon within the last 3 years. The grand total is 705… and growing.

For the sake of simplicity, we assumed that most of Amazon’s Toronto employees are in the tech field. We did not specify job function(s), as there’s no easy way to do so without entering dozens of possible job titles.

First, we analyzed who Amazon is hiring. Despite popular beliefs that Amazon in Canada represents opportunity for junior talent, it turns out that the majority of Toronto Amazonians are seasoned professionals with over 7 years of work experience. Wondering why you can’t hire good senior developers, mentors and managers? Ask Amazon. 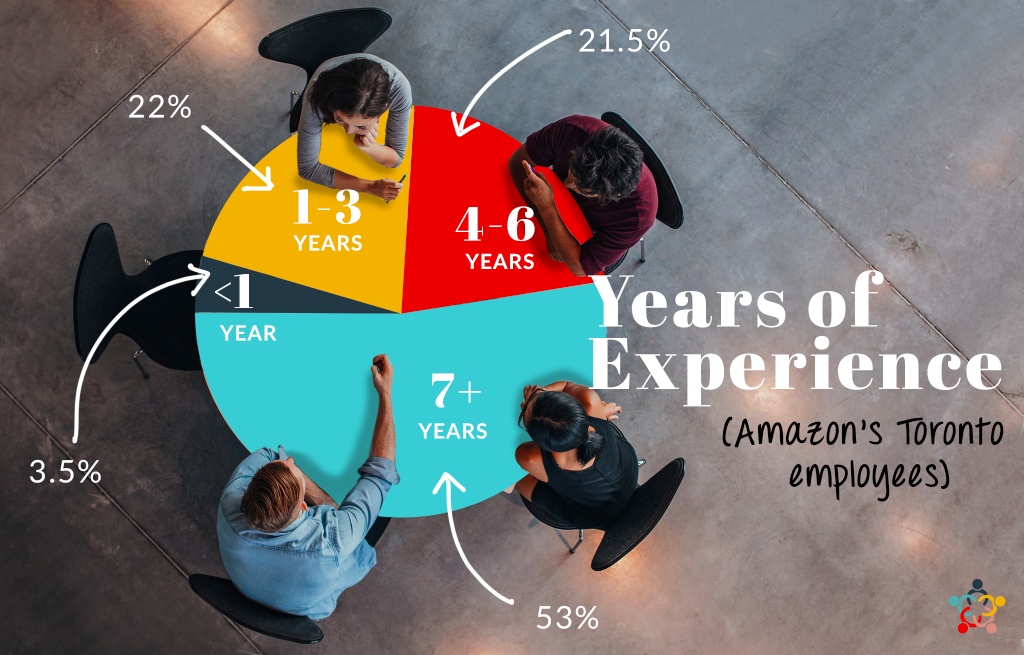 While Amazon is on record as planning to hire 200 new employees, a quick LinkedIn search shows they presently have over 400 job postings in Toronto alone (and this figure doesn’t include any of Amazon’s other brands). In fact, the company is accelerating its hiring. The graph below showcases the number of new hires Amazon has made in Toronto on a year by year basis using the Years at Current Company filter on our sample population. 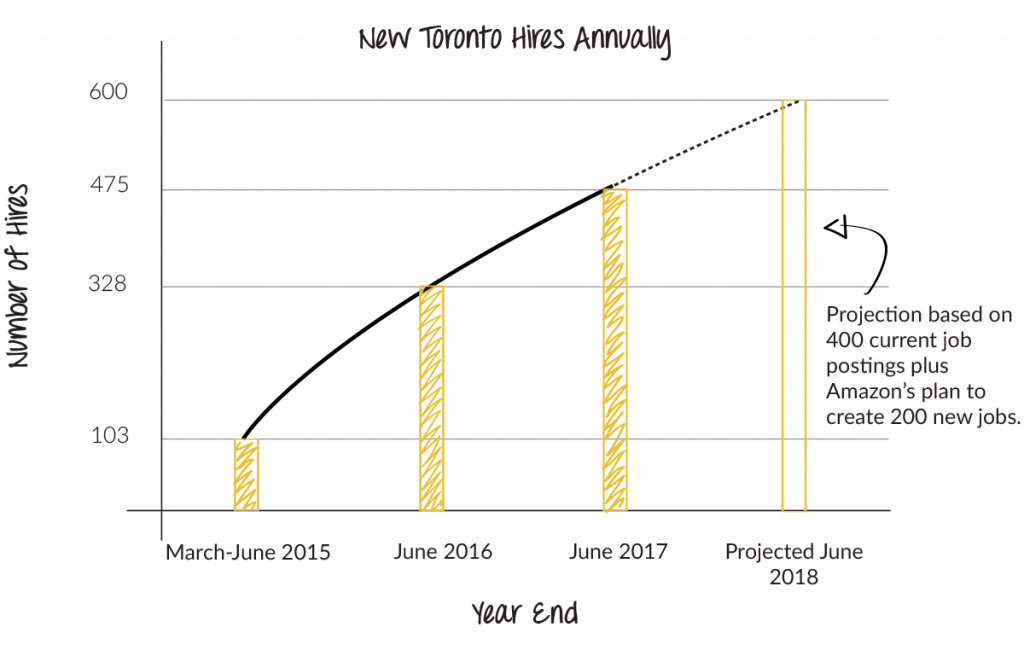 Note: Filtering for Years at Current Company does not account for employees who left a given company. The numbers provided are merely the delta of company size in the given time frames. If anything, the data pertaining to new hires is underestimated.

At first glance, these seem like big numbers. We wondered how Amazon’s hiring volume stacks up against Toronto’s home-grown companies. Here’s a graph that compares Amazon’s appetite for talent with the 7 Toronto companies listed in BetaKit’s feature on 11 Canadian tech companies to watch in 2017. 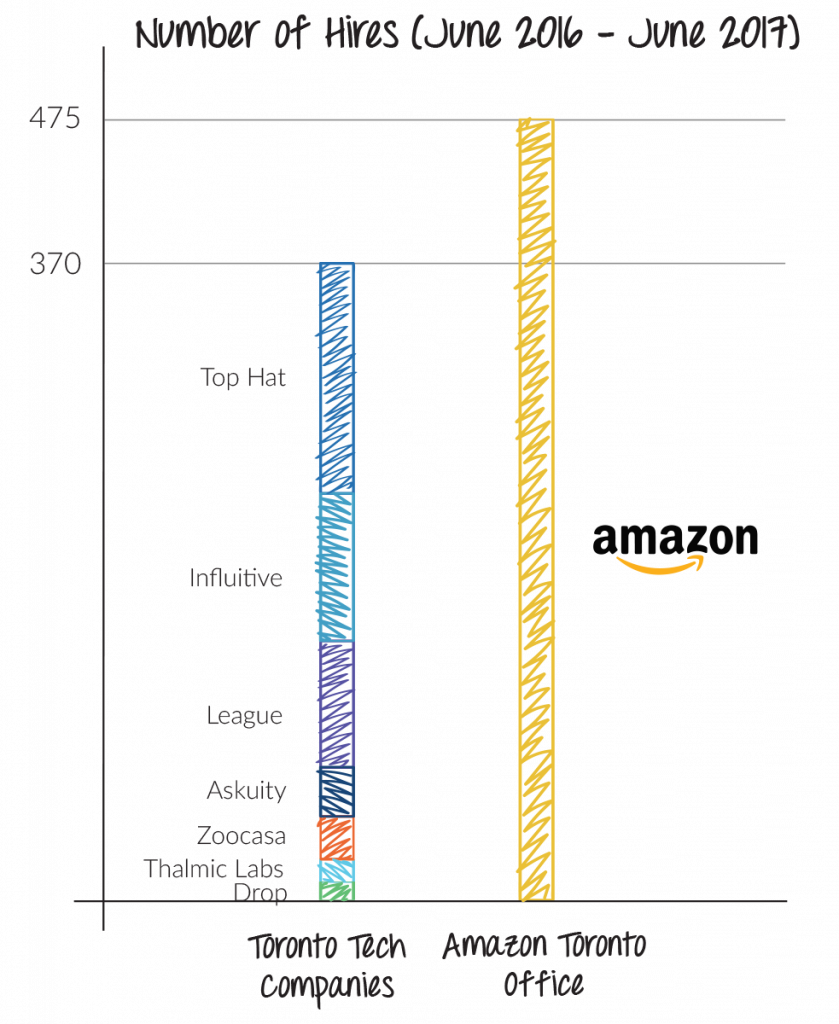 Speaks for itself. But, in case you haven’t heard of these darlings of the Canadian startup community, you might know some of these… 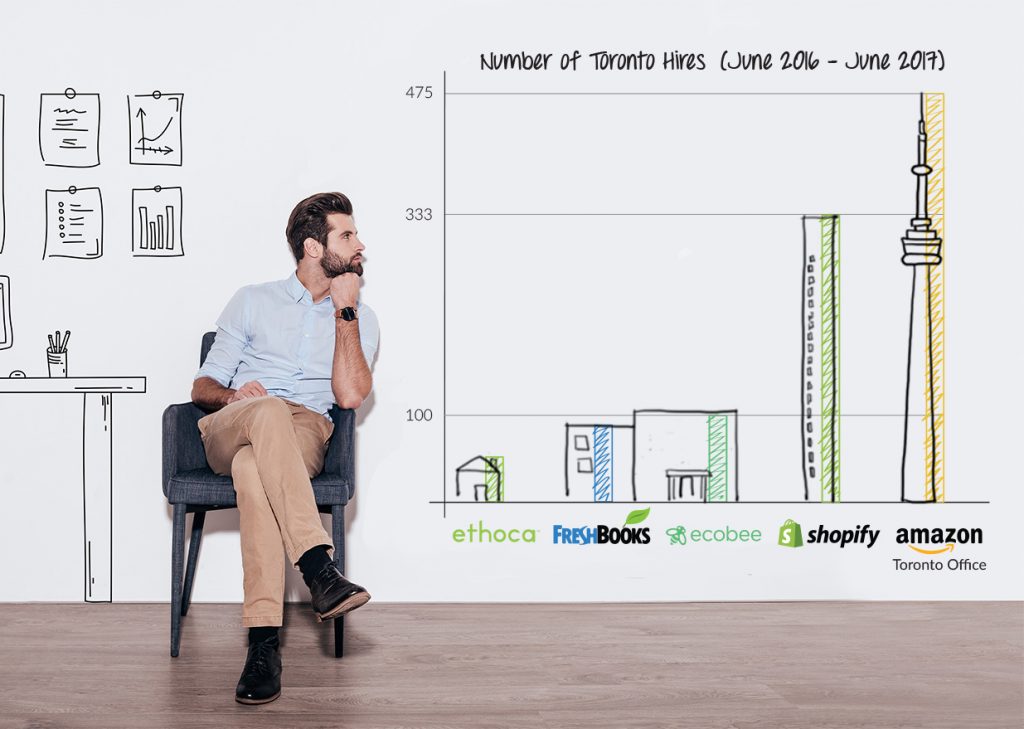 It’s not even close.

With this food for thought, I ask you this: Do you think Toronto tech companies can hold their talent? If you’re a Java shop, you might want to hand out some raises and bar the doors…or just stack your empty Amazon boxes in front of them. That said, it’s not all bad – if you can hold out long enough, it seems likely that Amazon will offset their hiring spree by boosting Toronto’s reputation as a tech hub. The hope is that as Amazon and other tech giants plant their roots in Toronto, they’ll attract talent from overseas.

What do you think? Would you rather work for a Canadian company? What are your strategies for keeping talent at home? Have you lost talent to Amazon? We’d love to hear from you.